What an epic week it has been.

I had to do a bit of tapering before my very first marathon on Saturday so I decided to only run 3 days of the week and not for longer than 10k each time. So Monday I did an easy 10k run and pushed a bit only the last 2k. Tuesday I was meant to go running but instead overslept, but bought a new pair of socks. Wednesday I did 9k to try the socks and then Thursday did another 7.5k easy with the Brooks Cascadia I was going to wear at the race, just to “prepare” them. Disaster struck! My left hip got stuck. It happens sometimes, I just kick in the air a bit and it goes “click” and everything is fine. It did not happen. Thursday afternoon I was limping and crying inside as I saw my race Saturday turning into a disaster or a no show. In the evening I did every possible stretching I could find in Bob Anderson’s book, copied tens of youtube videos to try everything possible to get the hip to click in place. Nothing. Friday I was limping even more. I tried running for the train in the evening and it seemed like running was less painful than walking so I decided to go to the race anyway. I tried to forget all the little niggles, the hip and how scared I was of running my first marathon and prepared everything for the day after and tried to go to bed early.

This was the menu for the day, before, during and after the race:

I got up at 5, had my usual pre-race breakfast of tea/toasts and made sure my belly was ready. I got into the car and drove to Ashurst, in Kent, even if most of the race was taking place in East Sussex, in the Winnie the Pooh forest.
I got there quite early, registered and waited drinking my water, had a banana and a power bar. The marathon was starting an hour or so earlier than the half marathon and 10k race, so there was not a lot of people around. Around 40 runners or so. After the briefing I hardly had time to get the GPS to lock and we were already running. No time for warm up! So I had no idea if the hip was fine or not, but completely forgot about it.
The very first thing that we all noticed was how much wet the terrain was. Mud everywhere, it was worth going off the beaten track most of the time to find some solid ground. After a couple of kms I was in the group of the top 5 and we ran together for a while. Nice guys, we chatted a bit and I started thinking, well if I do not do anything silly and stay with these guys at this pace the worst I can do is finish 5th (as no one else was behind us close enough to be seen). I kept on telling myself, try to stay behind the first guy, or lead for a bit but always stay with the group. 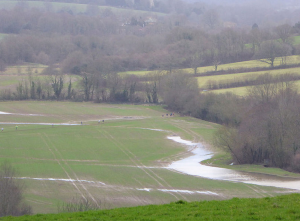 But then the silly novice in me made me do the opposite. After the first check point, around the 12th km there was a small climb and I felt good and did not slow down and found myself gaining terrain and I just kept on going. Big mistake. For the next 2 hours I ran alone, I kept on looking behind me and could not see anyone. I could not believe no one was catching up. I felt good at first. It started raining, I got to the steepest climb and power hiked in the mud and started telling myself how cool a guy I was etc. I was talking to myself aloud, like a crazy person. I felt heroic.

Things changed dramatically around the 30th km. I was supposed to get to the third checkpoint (which was the same as the second) but it never seemed to arrive. The trail was always the same mud with some bushes, mud, bushes, mud, bushes. I started to feel like I was lost and was going around in circles. The signs on the side of the track told me I was on course, but maybe I had been there before or was I going back? There were some dog walkers around and I was sure I had seen them before. I started panicking, I could not see anyone behind me either. Finally I got to the third checkpoint and the nice marshal lady there said something like “I was not expecting to see you here so early!” and I thought, well I am kicking ass here and got a bit of a boost. It did not last long. All of a sudden someone caught up with me and overtook me around the thirty-second km. That was a massive blow to my confidence. I ate my final gel and tried to stay with him but I could not, cramps were around the corner. As soon as I tried accelerating my legs stiffened. That was something I was not prepared for. I started seeing all the other runners behind me and all of a sudden I was 8th. I was so upset with myself. How could have I thought that I could just run at that pace all the time in that mud and be faster than all those more experienced guys? And now I still had 8 very hard km to do in the mud and I might lose even more positions. Running half marathons does not prepare you for psychological situations like that. In a way I was happy I had decided to do 3 marathons before the NDW50, I need these kind of lessons. These kicks in the teeth.

Luckily at the last checkpoint they had Jaffa Cakes! That really gave me a boost. I could not eat any more gels but the Jaffa Cakes were miraculous. I started running with a better pace and started catching up with some guys.
Then everything became confused. The half marathoners and 10k runners were finishing their race too and we all mixed. I did not know who I was supposed to try to catch up with or whether I was losing positions or not. I raced with a guy I then discovered was finishing his half marathon. Anyway it helped as I must have overtaken some marathoners too as I got to the end and I was 5th.

What a relief! At least I did not do worse than I had planned before the first check point. I still managed to finish with the 4 people I was running with at the start. I wonder if things would have been different. Probably not as they would have probably had more energy than me anyway at the end. You can see the final results here and how I managed to lose a 5 minutes advantage and finish 5 minutes after the first finisher.

So, I finished in the top 5, in 4:11 on a course I believe was quite tough. Not much ascending, but the mud was really relentless. Even running downhill was hard as it was so slippery. Good experience, next time I will be smarter.

The race was very well organised. The marshals were super friendly, the atmosphere was good and I cannot wait to taking part in the next race in the series.

Once I got over the fact I made it harder for me from the start and I realised I finally managed to run a marathon (and a trail one) I was very happy. I still am, I am a marathoner now! I’d like to thanks all the friends and family who sent me messages before and after the race. I like to feel people care about my adventure and you are all helpful.

I’ll wait a couple of days and they I’ll start preparing for the next one. More hills work and at least one run over 35km.

See you on the trails (in the mud maybe).

3 thoughts on “A muddy emotional rollercoaster”