A week after completing my first ultra it is time to think about the future.

I am looking forward to running another 50 miler soon, but in the mean time I will run some local half marathons and marathons.

I’ll start in June with the June Richmond Half, then I will go back to the North Downs way to run the North Downs Way Marathon and then a week later (end of July) I will do another half, the Wimbledon Common Half, which I really enjoyed last year.

After the summer holidays I would like to run another ultra, maybe just a 50k. Nothing planned yet.

To prepare for the next half marathon I need to get some speed back. Lately, preparing for the NDW50, I slowed down quite a bit and in the last weeks I have not done any speed training as I was afraid I would get injured.

I recovered well from the ultra, so I started running almost straight away.

On Friday I decided to rest as I did not want to overdo it after the NDW50 effort, b 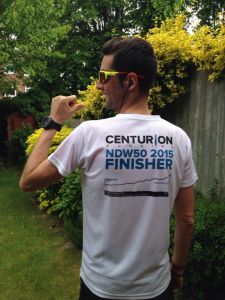 ut on Saturday I felt so good I went out for a relatively fast run. I was wearing the NDW50 finisher t-shirt, the sun was shining and I felt pretty cool. At the end I alternated fast and less fast kms and went back to running faster than 4 min/km which I had not done in ages.

Sunday I felt the legs a bit tired so I took it easier. I ran 18.5k at 4:44 min/km and then got home and finished the day with 2 extra kms with my daughters. It’s always a pleasure to run with them. I wish we could do it more often.

Next week is going to be all about speed, interval training, tempo runs and maybe a Parkrun on Saturday.

I am not sure I will update this blog on a weekly basis as I did before as the journey from half to ultra has been completed. I am pretty sure I will find more challenges to talk about.