Here is the usual end of year post. It has been an incredible year for my running. Last year’s plan was to go from half marathon to ultra marathon and I made it.

If it had not been for the last 2 months where I could not run due to injury, the rest of the year I basically run 6 times a week (except for race recovery and tapering). 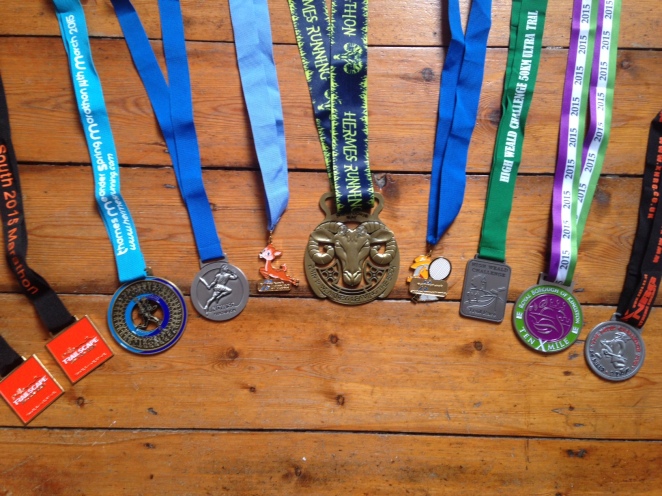 Here is a summary:

I ran my first marathon, the Trailscape Ashurst Trail Marathon, where I learnt that I was not very good at pacing at all!

I ran my second marathon, the Trailscape Wendover Trail Marathon, where I learnt that the stomach can be your worst enemy.

I ran my third marathon, the Thames Meander Marathon, were I did my PB but I was not very happy at the end as I (again) completely paced it wrong.

Training got serious for the NDW50 and started running well over 100k per week. I did my first back to back long runs during the week ends and ran my first 50k in training (and felt like superman)

The “awesomest” month of the year where I ran my first ultra, the North Downs Way 50 mile race. I was an amazing experience and I was hooked.

I recovered fast, dedicated the month to speed training, ran a Bushy Park Run to check progress (matched my Bushy PB) and then ran the Richmond Park Half Marathon where I really enjoyed competing and finished 9th.

I went a bit crazy and ran a marathon one week and a half marathon the week after. In the North Downs Way Marathon I discovered that the NDW is a killer whatever the distance and that pacing was still unknown to me.

Pacing was not needed at the Wimbledon Common Half Marathon where I just went as fast as I could all the time, finishing 9th and almost beating my PB (the mud made it hard).

I took an holiday from racing by did a lot of running. I explored part of the Ridgeway and part of the South Downs Way (beautiful). Then I ran a lot in Italy, mostly running from crazy wild boars.

I ran the High Weald Challenge 50k Ultra where I really enjoyed the company of Craig, but was not too pleased with the last 10k.

I ran the Royal Borough of Kingston 10 mile race where I finished 14th and got new PBs on 10k, 15k and 10 miles, but then took ages to recover from.

Another super awesome race! I did the Druid Challenge, my first multi stage event, I loved every second of it, ran 84 miles, finished 13th, but picked up a nasty shin injury.

Sad month. I only ran 5k here and there just to check the injury but things did not get any better. Luckily the rest of the year has been so amazing I did not mind losing 1.5 months of running.

In 2016 I will probably race a bit less (I already cancelled the January marathon due to the injury), but I will do more longer races. I have already entered all four 50 mile races from Centurion Running and I will therefore try to do the Grand Slam of 50s. In between I will definitely run some more marathons, maybe a couple of half (the local ones) and hopefully I will help my friends Davide and Manu pacing them when they come here to run the NDW100 and SDW100 respectively.

I hope you will have a wonderful 2016. See you out there!